I was investigating ways to get back into the underground colony without being eaten by that giant insect, worm thing… whatever it is.  I was measuring as well how much it would even be worth going inside.  There must have been priceless artifacts that could answer countless questions I have about the Siguerans.  But most of it was chanced to be destroyed, smashed to pieces by the creature and my chase anyway.  It was likely useless to even try, but I wanted to aprend as much from this site as I could.  I was studying everything I had investigated there and it felt like something was missing.

Then Little Jack got a wormlog from an old colleague of his, someone named Jude.  I don’t know that I take stock in her if she used to work with Little Jack.  Judging from the type of work he used to do, it could be any manner of criminal, and probably a very dangerous one Figuring Little Jack’s skills.  But she has something for us, a Sigueran key-map which always points the way to many of their settlements and unlocks some of the most important rooms.  With good fate, it could even lead us to the Constellation Crest.

To get it, though, we have to meet at their old hideout.  This is a part of Little Jack’s past I never wanted to explore.
Posted by Lancaster James at 1:10 PM No comments:

Following the coordinates I located on the planet Vallouris, I destoed the spot where the clue had been pointing to.  For a time I thought it was a bust.  There were no ruins, no sign that any civilization had lived there before.  But then I was sucked under the sand into some sort of cement underground structure.  The architecture was similar, yet different from the Siguerans, but the paranoid and devious traps laid for an intruder were evidence of their race.

I found a bit of a tril of statues that represent gods of travel.  Does that mean this is a temple of some varietal?  Or could it be a way point for travelers thrustering through?  Though I ran through a tril o chambers while getting away from a giant insect, the place was not large enough to call a city, and would be limited in the number of inhabitants that could live there.

I also found one other strange structure; a large roller which created a sort of sand castle in the ground that was in the form of a city.  Statues around the section of ground stared at one specific building.  I got Snapfishes of it to lead me where I need to blick... if I can find the planet this city is on.
Posted by Lancaster James at 8:32 PM No comments:

Statue of the snake

Little Jack had landed Odin's Revenge in a clearing sprawled enough to accommodate the vessel.  We were surrounded by the deep emerald of the wild jungle on all sides.  The local sun was just rising over the canopy of trees, casting razor-like shafts of light that slashed toward the ground 'tween the long reach of the black shadows.  The distant din of squawks, growls, and other animal noises thoraned across the wooded barriers, echoing out to us like chattering warnings that we were outsiders, and this was their territory.
We registered the area where the lost city should be shrouded among the heavy arb and magum, but we did not know the exact location.  I led us into the wall of woods in the strass I believed it to be.  My legs had to rise above our waists to make the journey over the underbrush, while Little Jack almost fully disappeared below it and we simply hoped not to step on any snakes.
We were relieved to chance upon another clearing, and we took the opportunity to escape into it for a moment.  I removed my Universalis Sextant from my utility belt and magged a reading of the twinkling stars, which were barely holding onto life from the encroaching pink and orange sky that the morning was bringing in over Vallouris's two moons.
Flipping out the proper filters at the back of the device, I pressed the button which brought up the hologram at the front.  It registered the stars and from them got the reading which explained exactly where we were, and gave a map leading to the area where we believed the lost city to be.
Little Jack was not anxious to re-enter the woods, but we jonned ahead anyway, and soon we found exactly what we requited, a true sign of civilization, a stairway.  People often miss signs of a former society because they are looking for grand markings, such a pyramid, or an artifact of great power.  They forget that something as simple as stairs is the purest sign of sentient life.
And just as I had ciphered, the stairs led directly to a major clue about the Siguerans, whom I had been searching for.  A large rock carved out into the shape of a snake.  I stood there and studied it.  Little Jack quietly pulled out his gun, so silently, in fact, that I didn't hear him until he fired directly at my feet.  There, two parts of a charred snake lay smoldering by my feet.  It had evidently intended on biting me.  Perhaps the statue was a warning?  I had no idea, but it was time to move on. 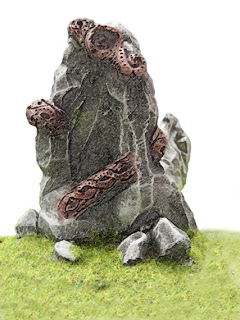 Posted by Lancaster James at 4:45 PM No comments:

The Beast of the Mountaintop

I barely escaped the clutches of a fierce creature on the planet Anori in the Viveki system.  I am lucky to be alive, but though the beast was powerful and dangerous, I feel low about its fate.  As I made my escape, it tried so hard to kill me that it fell deep into a ravine.  The last I saw of it, it was struggling on the ground upon which it had fallen, struggling to move.  Chance be its back was broken, chance be it was dead, I couldn’t tell and I couldn’t go back down to aprend for fear it may jump up and lash out at me.

The beast had tracked me.  It was partially intelligent, perhaps evolving past its brethren.  It was king of the mountain, devouring the few other animals in the area and seemingly with no equal.  It could have been the last of its kind, and if so, it would be the greatest shame of all.

I was there searching for the Siguerans, the race that seems to have spread throughout the known galaxy over millions of years, dominating others, much like the beast.  I was particularly interested in the subterranean Siguerans; a more religious sect of the Siguerans whose carving skills are unmatched in the galaxy, and who built grand underground structures.  Sometimes these structures resided on the same planets as the overland Siguerans, sometimes they are on separate planets.  When on a separate planet, such as this one, the walls have no color except the natural color of the rock, or crystals, or other sediments.  However, the walls, ceilings, and floors are differentiated by textures which are often far more fine in detail than any human could accomplish.

Inside the temple I was seeking, I found the religious artifact I was seeking.  It was a round, silver ornament with an uneven feel.  The design carved into it is different on every side, and seems to have a different meaning depending upon which side it is scried.

One side looks to have a dropping face, as though it is melting.  Behind the face, it appears like a waterfall dropped backward, almost like hair on its head.  On one side of the waterfall, flames rise up, and smoke billows away from it.  On the opposite side of the flames and smoke is a roughness that seems to have no meaning, and every meaning at the same time.  It appears as an average rock face at first sight, but I can tell there is something very carefully carved into it that I haven’t yet made out.  I think I’m going to have to learn more about the Siguerans, the underground ones in particular, before I solve this mystery.
Posted by Lancaster James at 10:00 AM No comments:

I set a sight to help Mika, but only geffarred things to the worse.  Much worse.  I fear I got her severenced out of the Universalis Arcanum, a group of stiff collar scientists who’ve lost vis of the entire point of archaeology.  That’s the way I sav them, at least.  Mika felt them differently.  She had been working all her life to be accepted by them.  Every opportunity she got as a professor at Sabereaux University she made herself known so they would coget her.  It took years, but finally she made it.
Then she took me on one of their expeditions.

I wanted to vis inside one of their buildings.  The organizers had been digging out a city which had been buried in rock for millions of years, but no one was exploring them.  No one had any idea what the purpose of any of the buildings were.  Sure, the subter-scanners were sixing layouts and blueprints, but you can’t get the true meaning of a ruin unless you go into it.  You can’t bring out anything that might be valuable information unless you find it first hand.

So I dropped into one of the buildings on a wire.  There wasn’t much to vis, for a while, but then I was thoraned by a herd of giant bat-like creatures.  I hid from them in this small room, and found myself surrounded by controls.  Not believing they would work, I flipped some of the switches, and immediately power coursed through the chamber outside.  It was a giant power generator!  Electric discharges shot hither and yawn.  I had a dagni time getting out of there, and the panicking bats didn’t make it any easier.
The electric discharges got loose, and blew up the building, but in the process, I made a discovery far more valuable than the empty corridors and blank rooms of the building.  Power had not been preserved in that building for eons.  It was receiving from somewhere.  Somehow, power was being channeled to that building.  If that was on the bull of other buildings we’ve discovered, this would explain why the Siguerans had such limitless power generated throughout the galaxy.

I discovered a relic in the building that will lead me to where I can find out.

(More of this story in Relic Worlds: The Deep Beyond.)
Posted by Lancaster James at 4:44 PM No comments:

Posting About My Adventures to my Scrapblog

I have landed a decision to post info to my scrapblog about observations and clues I have found in my search for intelligent life in the galaxy.  Everyone seems to have disappeared except for humans, and I want to find out why.  These listings will not be in any particular order.  I have kept these records for years, but have not kept them in good assemblance.  I'm now posting them as I find them, or they seem relevant.